McKesson Medical-Surgical and The Highlands-Massey Classic hosted a Jeopardy viewing party on July 25, at The Country Club at The Highlands in Chesterfield, in an effort to help raise funds for cancer research. McKesson’s Doug Thornton, VP IT Process, a Highlands resident, was a competitor in the episode slated to air that date on WRIC-8 in the Richmond area.

“I’ll take ‘McKesson Medical-Surgical Celebrities for $1000’, Alex.”
“I.T. leader & Jeopardy player who hopes to raise funds to fight cancer through his appearance on the show.”
“Who is Doug Thornton?”
“That’s correct! Choose the next category.” 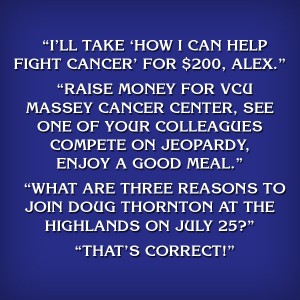 “I knew I wanted to do something to strike back at this disease,” Doug said. “And I believed that many of my McKesson colleagues would want to join in this effort.”

Even better, when McKesson employees collaborate, we leverage our strength in numbers and assets. Donations to this event are eligible for matching from the McKesson Foundation. So, a $50 donation becomes $100! We are also seeking a Regional Grant from McKesson to VCU Massey Cancer Center. On top of that, George Emerson, Honorary Chairman of The Highlands-Massey Classic has agreed to personally match McKesson donations dollar-for-dollar, up to $25,000. This is a great opportunity to collaborate in the fight against cancer!

“Most of us know someone who’s been affected by cancer, and an opportunity like this offers a nice way to support the fight against cancer, as well as cheer on one of our coworkers who’s checked an item off of his bucket list,” said Stanton McComb, President of McKesson Medical-Surgical. “I hope Doug did well on Jeopardy, and I know we can do well together in this effort.”

Although the viewing party has already taken place, there is still time to lend your support. All donations will benefit the Highlands Fund at VCU Massey Cancer Center.

About the Author: bryce hipps